Translation: The Only Sacred Language of the Church 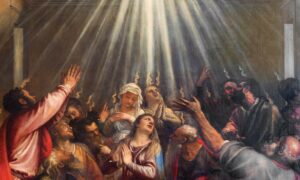 Over 30 years ago, I wrote a piece on the importance of the Latin language as cultivated in the Middle Ages (more recently republished here). I still hold, without reservation, to the views I presented in that article. They concerned the importance of any classical language – that is, one no longer used in popular discourse – in maintaining minimal normative formulations of philosophical and theological truth. I refer here not to final but to normative formulations, serving truth the way curbs in a road serve the travelers along its path – keeping them on the road to be sure, but not revealing in advance the curves and twists that still lie ahead. If I were rewriting the essay today, I would more explicitly pre-empt a possible misreading of my intention. I did not mean to suggest that Latin is Christianity’s, or Catholicism’s “sacred language.” For it is not.

There are indeed religions with sacred languages, such as Hinduism with its Sanskrit, Zoroastrianism with its Avestan, Judaism with its Hebrew and Islam with its Arabic. Those tongues have been all but indissolubly wed to the religious traditions they articulate. However, there are no parallel nuptials between the Christian faith and any language at all. Even the Latin editiones typicae issued by the Vatican for its official declarations, liturgical texts and also for the popular (“vulgar”) edition of the Bible, are no more than approved documents of reference. To these, subsequent translations must defer when negotiating conflicting construals in order to forestall preventable confusions. However, unpreventable confusions are not thereby eliminated, especially in the case of Scripture. Significant ambiguities perdure, whatever the language used. Still, despite the challenge, translation is of the essence of the Christian message.

The Bible is not just the most translated text in the world. It stands alone among translated books, with more than 3,300 versions (of at least major parts of the text). The closest runners-up can hardly hit 500. The Book of Books splits its linguistic map – for Christians at least – into two extraordinarily different languages: Old Testament Hebrew, which is as Semitic as it gets, and New Testament Greek, which belongs to an entirely different family, the Indo-European. What’s more, the content of the book seemed destined from the very beginning to follow a promiscuous series of linguistic migrations.

Already a couple of centuries before Christ, the Jewish Bible was rendered into Hellenistic Greek. This is the famous Septuagint, significantly the only version of the Old Testament cited in the New – which, in itself, is already an inspired recogntion of the role of translation. Some Jews actually held the very translation to be inspired. Centuries after Christ, the great St. Jerome would render both Old and New Testaments into the nascent popular Latin that was to intellectually and poetically inform the medieval world (and eventually generate the Romance tongues). Catholics have sometimes fallen into the same mistake as those Jews, and seen the Vulgate almost as an inspired translation. It is a great translation indeed, but it is the content that is inspired, not the language.

Once the increase in literacy and the invention of movable type arose, it was not long before the Luther Bible and the King James Bible left their unmistakable imprint on two of the languages that would mold modern thought more than most (German and English). Renderings into other European tongues, followed by multiple world languages, soon followed suit, and the Biblical translation industry has barreled on unabated ever since.

The eagerness of the Catholic Church to affirm its adherence to unchanging doctrine in the face of multiple Lutheran, Calvinist, Anglican and Anabaptist experiments of the 16th century – followed by the explosion of denominations and new interpretations of Christian truth in the following centuries – created a tendency to maintain the use of Latin in the liturgy. This continued not only up through the 19th century, where Latin was still a learned tongue understood by the educated (even Marx could read Latin and Greek!), but beyond it into the 20th. By then, however, the language had receded into a dark corner of the modern mind, accessible only to classicists and Catholic theologians. The rest of the public was out of linguistic reach. The habit of only whispering parts of the Mass merely underscored this measured retreat from the duties and toils of translation.

Inevitably the Church in the Latin tradition has allowed its liturgical texts – not only in the laity’s, but also in the altar’s missals – to finally be translated into the world’s tongues (still monitored by Rome, where those “typical” editions continue to hold a place of honor). In this they have followed the example of Protestants in making not only the Bible, but also the liturgy, available to the secular ear. Of course, some religious communities may opt to maintain the Latin, but they will usually require that their members receive some training in the tongue. In general, however, the opening up of the liturgy to the multiple languages of the world has been a huge blessing, and long overdue.

I certainly have nothing at all against Latin (I refer again to my previous article). A selective and measured use of it in parts of the liturgy – especially when the treasures of Gregorian Chant are included – should, if I had anything to say, continue. But one of the problems with still using Latin for the entirety of parish masses today, beyond the problem of intelligibility, are the alienating pronunciation oddities. The only thing that is worse than hearing a Frenchman glottalizing his r’s while saying miserere nobis is hearing Latin pronounced with an American cowboy accent. My one experience of this was the only time in my life that I was sorely tempted to scream out during a Mass.

I have long celebrated the Eucharist in Latin myself (according to the standard formulary of Pope St. Paul VI, which is the current and official “Latin Mass” of the Church). My Latin pronunciation, by the way, is acceptable, but I have also celebrated in French, English, Italian, Spanish, German, and – for the last 30 years – in Portuguese. What a joy it is to hear the message of the Gospel and the beauty of the Eucharist reach forth into the morphology, syntax and characteristic meter of more and more of the tongues of the world. And there is still work to do, for there are over 6,000 languages in the world!

It’s a long road from Babel to Pentecost. But it is a road the Christian Church, as no other religion on earth, is destined to walk. All minds were created to understand, and all mouths foreordained to take upon their lips the words that come from the Word Itself.