After nearly five years of editing and tweaking, my philosophical and religious travelogue, Seven Islands, is now available on Amazon. The text of its earlier drafts on my site have now been considerably changed (and hopefully improved), and will no longer be posted. The book can also be ordered from outside the United States. A Portuguese translation – or actually simultaneous version, since from the beginning the text was written in both languages – is already available as e-book on Amazon, and a paperback Portuguese version is in preparation. It should be published sometime in mid-2022.

I have copied the book’s complete English Preface below to give a better idea of its content. (Information on the Portuguese version is available under the “Filosofia Comparada” menu above.) 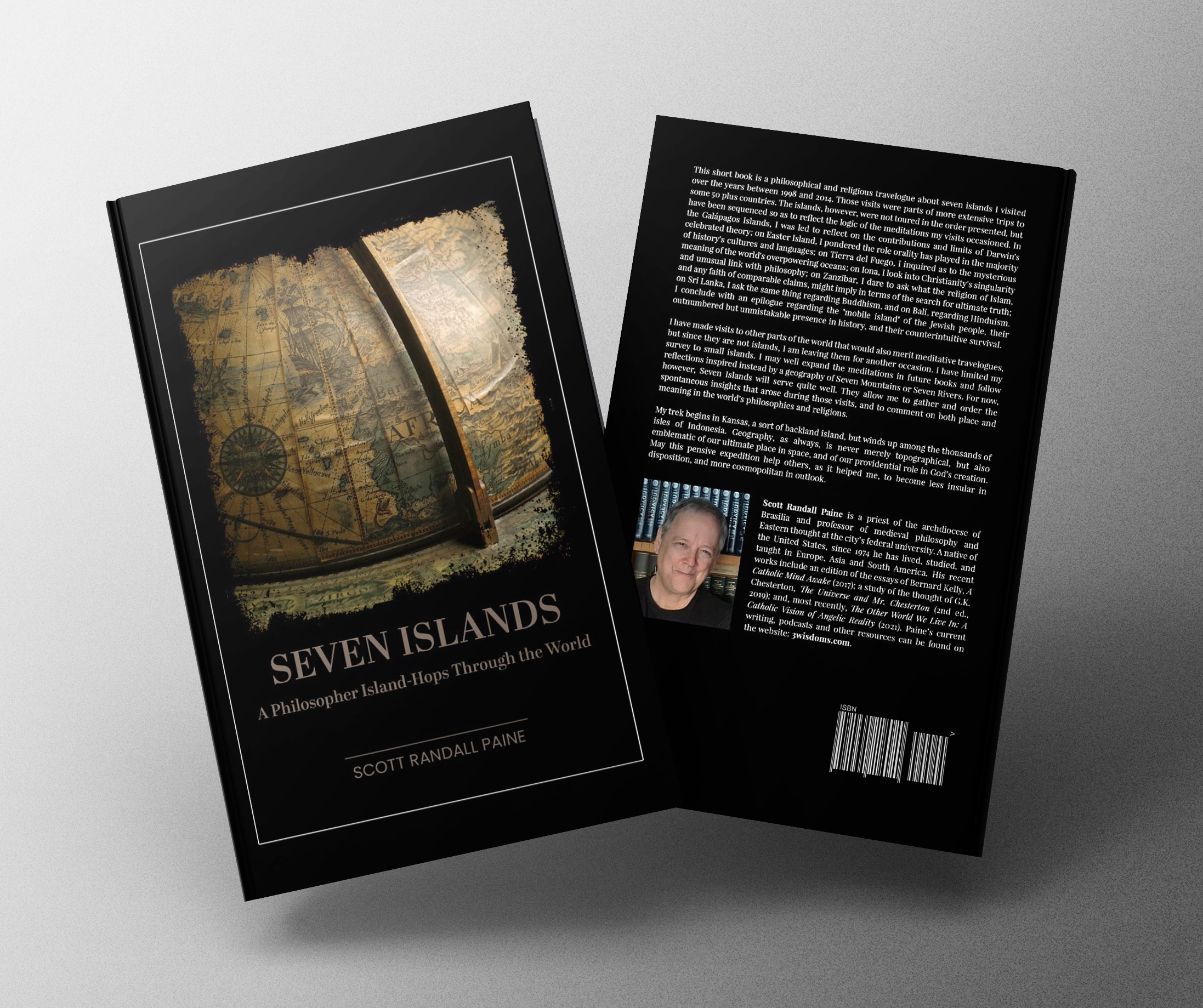 This short book is a philosophical and religious travelogue about seven islands I visited over the years between 1998 and 2014. Those visits were parts of more extensive trips to some 50 plus countries. The islands, however, were not toured in the order presented, but have been sequenced so as to reflect the logic of the meditations my visits occasioned. In the Galápagos Islands, I was led to reflect on the contributions and limits of Darwin’s celebrated theory; on Easter Island, I pondered the role orality has played in the majority of history’s cultures and languages; on Tierra del Fuego, I inquired as to the mysterious meaning of the world’s overpowering oceans; on Iona, I look into Christianity’s singularity and unusual link with philosophy; on Zanzibar, I dare to ask what the religion of Islam, and any faith of comparable claims, might imply in terms of the search for ultimate truth; on Sri Lanka, I ask the same thing regarding Buddhism, and on Bali, regarding Hinduism. I conclude with an epilogue regarding the “mobile island” of the Jewish people, their outnumbered but unmistakable presence in history, and their counterintuitive survival.

I have made visits to other parts of the world that would also merit meditative travelogues, but since they are not islands, I am leaving them for another occasion. I have limited my survey to relatively small islands. I may well expand the meditations in future books and follow reflections inspired instead by a geography of Seven Mountains or Seven Rivers. For now, however, Seven Islands will serve quite well. They allow me to gather and order the spontaneous insights that arose during those visits, and to comment on both place and meaning in the world’s self-understanding and its various religions.

My project is nonetheless episodic. The intention is not to outline a theory of world religions, much less offer mini-treatises on evolutionary biology, cultural anthropology or oceanography. I am thinking instead of the many who might never have the opportunity to visit these insular nodes of scientific, philosophical and theological importance. I offer only the random ponderings of someone who had the good fortune to walk upon their soil, and to become the grateful beneficiary of lights unavailable in books.

The hospitality with which I entertain disparate worldviews of both western and eastern theologies may lead some to suspect a mere eclecticism or even indifferentism in my own beliefs. This is far from the truth. My purpose is neither to preach nor even to teach, but only to share what I’ve been taught. Furthermore, I favor no dreams of a single mega-religion of the future, where all creeds and cults find irenic formulations that remove specific differences. As should become clear from reading about Island Five, I am unable to contemplate even the role of Christ without including the transcendent presence of the Logos he is, and of the wisdom – both historically focused and thematically cosmic – which he unfolds. Nor can I be true to my Catholic commitments without also being profoundly catholic (lower case) in my sentiments, and that means “universal” in my appreciation of truth wherever it presents itself, and however surprising its articulations.

My trek begins in Kansas, a sort of backland island, but winds up among the thousands of isles of Indonesia. Geography, as always, is never merely topographical, but also emblematic of our ultimate place in space, and of our providential role in creation. May this pensive expedition help others, as it helped me, to become both less insular in disposition, and more cosmopolitan in outlook.