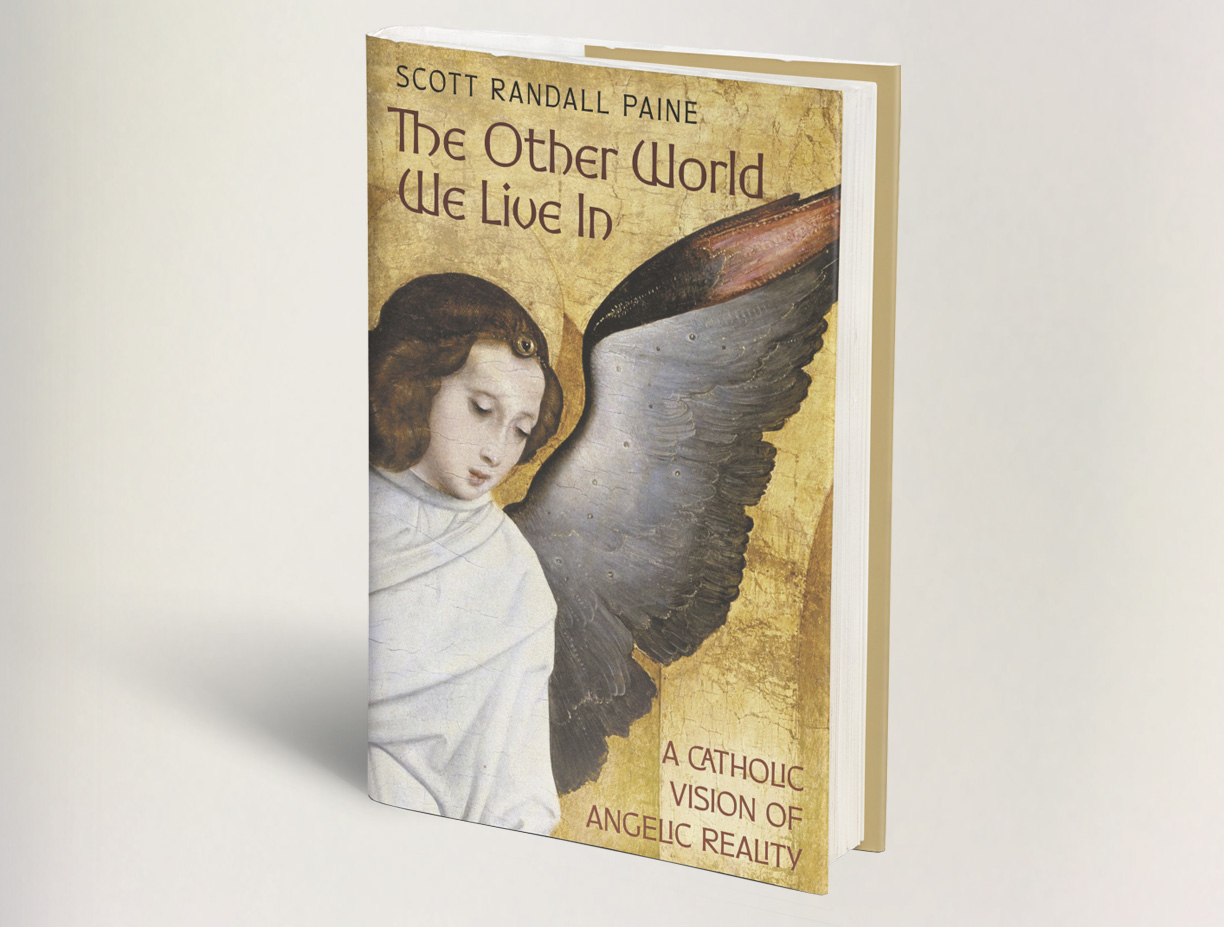 THE OTHER WORLD WE LIVE IN

A CATHOLIC VISION OF ANGELIC REALITY​​

Praise for The Other World We Live In

“Where are the angels these days? No doubt, they mind their own business. And a great business it is: that of God’s ultimate plan for the created world. The real question is where are we in the cosmic battle that engages the opposing armies of Heaven and Hell? This beautiful and terrible book (‘terrible’ in the best sense, like Our Lady, who is said to be, terrible as an army in battle array) elucidates the part we are to play in the drama unfolding all around us on an invisible plane. How can we afford to miss out on this vision?”

“In sparkling, spirited prose, Scott Paine addresses the modern world’s appalling amnesia regarding the nature and history of the angelic orders, and their demonic counterparts. The result is a thoroughly engaging guidebook to the world of spirits, ranging from Our Lady’s relationship with angels to the reasons why devils are falling as well as fallen, to the arsenal of demon-busting weapons in the Catholic armory. Throughout, Paine’s scholarship, wit, and insight never flag, producing a book that will be happily read by the choirs of heaven as well as the faithful here on earth.”

“The author integrates insights into the world of angels and demons with Christian spirituality, buttressing what we profess in the Nicene Creed, namely, our faith in one God, the maker of all things visible and invisible. Reflections regarding the nature and mission of these spirits, both good and evil, assist the reader in whetting the all-important tools of discernment between light and darkness. We are made acutely aware that our struggle is not against flesh and blood. We are spurred on to a more intimate, enlightened friendship with the good angels, reliving moments when mortals ate angelic bread. The whole is couched in theologically refined language and a style at the same time gripping, stirring, and uplifting.”

“Yet another Catholic book on angels? Thus I mused as I began to read The Other World We Live In. But the first page changed all that. Paine has authored a masterpiece of angelology. Crisply concise, it nevertheless covers the topic comprehensively: cosmologically, metaphysically, psychologically, scripturally, spiritually. His treatment of the fall of the angels is the best I’ve read, and the latter part is a masterclass on spiritual warfare. Yes, I read Saint Thomas Aquinas’s treatise (and several other works) on the angels, but not till I engaged this tour de force did I realize how essential are the angels in every aspect of life.”

“There are truths beyond our comprehension, truths we may know to be true but never fully comprehend. In our myopic-scientistic culture, such truths—like those concerning the angels—are often labelled as fantasies. Drawing upon the intellectual traditions of far wiser cultures, Fr. Scott Randall Paine illuminates how the angels foster the coherence of the spiritual world with the visible world. That is, how the solidity, reality, and diversity of these ‘separate substances’ engage with each other and as well with human beings, the Church, the unfolding of history, Christ and His Blessed Mother, and sin. This remarkable book also provides practical bearings toward living with these hierarchical beings, as understood in the light of Christian faith.”

“The angelic world so surpasses our limited understanding that we need to approach it with both theological precision and poetic insight. In The Other World We Live In, Fr. Paine deftly leads us on such an exploration, emphasizing the light and glory of the holy angels, but also giving due attention to the dark world of demons. His presentation is balanced and at times humorous, leading one to understand why Chesterton said ‘angels can fly because they can take themselves lightly.’”

A few years ago, the British comedian Stephen Fry spoke on television about a recently completed tour through the United States. He had many good things to say about the yankees, and although a convinced atheist, still showed respect for the robust Christianity of so many Americans. Nonetheless, he could not help remarking with alarm on one item of faith that he found particularly bizarre: many of them still believe in angels!

Since wide-spread misunderstanding prevails in any use of the word “angel,” I choose to introduce my reflections by using the medieval, metaphysical term for the pure spirits. We might pre-empt Mr. Fry’s outrage by reminding him that what we are really talking about are beings with intellectual and volitional endowments, and that exist separately from matter: in philosophical jargon, “separate substances.” This will hardly convert him, but it may convince him that what he does not know about angels could – just possibly – be far greater than what is conveyed by the frivolous caricatures he, and the rest of us, are familiar with.

Indeed, today we are in a bad way when we try to think intelligently about angels. Even those who still believe in them are not much better off. More often than not they will think of spirits as wispy and rarefied, passing through our world like a morning fog. Here they come, smiling and fluttering, like ethereal butterflies, casting pixie-dust over our benighted world. We might expect help from sacred art, but here too we are frequently misled. How often do we see Renaissance and Baroque depictions of cute, bare-bottomed “cherubim” (embarrassingly called putti in artistic lingo)? Even worse, we might also see God’s spirits presented as wan, effeminate figures resembling kindly, Caucasian ladies in flowing evening gowns.

Sometimes the only antidote to these silly fantasies is to encounter one of our world’s pre-literate tribal cultures; they still know that spirits are not to be messed with. Or perhaps we could listen to an interview with a good, experienced exorcist. These gentlemen know only too well that we are speaking of powerful realities, albeit, in this case, from the darker side.

My intention here is to convey the reality of a world we also live in, but one that our senses rarely perceive, and that our celebrated scientific outlook can often not even imagine. But it is a world that is real like mountains and stars are real. In fact, it is even more solid than the proud stone of the Rocky Mountains, and more luminous than the shining stars in the firmament. Spiritual reality is as real as it gets.

This does not mean, of course, that the material cosmos is unreal – far from it. Nonetheless, the gnostic temptation of demoting material reality always lies in wait when we emphasize spiritual matters. But God positively willed the creation of matter; he destined all its mass and energy, along with the angels and our troubled human race, to a shared future of glory. Our problem is trying to keep all three components of creation in mind. We tend to waver between two false absolutes: a purely spiritual world or a purely material one. In earlier times, when people opened their eyes upon the world of nature and the stars above us, their gaze reached further than ours. They saw how the spiritual and material worlds interpenetrate, cooperating in a revelation in which our own composite human nature becomes, in the words of Thomas Aquinas, the mirabilis connexio (the amazing link). We are what connects matter and spirit into a perfected mirror of the Triune God.

That is to say, our ancestors not only detected the hand of a Creator God who made all these material wonders and sent them into being, but also the unmistakable signs of a world of pure created spirits, powerfully present within the concrete mysteries of nature. The angels almost seemed to wink at them as they mediated between the Almighty and those of us in the corporeal world. Our fellow humans of yesteryear would have regarded the arrogant eyes of the secular know-it-alls of today as blind, seeing only two dimensions, when there are three (or even more). They would have held our quantified scientific interpretation of nature to be not only partial, but even partisan. The scientist poring over these measurements would have seemed to them like someone staring at a musical score, unable to hear the music.

Most of our languages, modern and classic, refer to spirits using the metaphor of air, wind or breath. Air is invisible, and yet it gives life; air is seemingly weak, and yet hurricanes and tornados are among the most violent of nature’s outbursts. The fact is that spirits are not just ideas or values floating in some imagined stratosphere. Spirit is the most ontologically dense and operationally intense of all the varieties of being.

Moreover, spirits are not, strictly speaking, things at all, but rather “someones.” In a word, they are persons. And persons are what the “spiritual” is all about. To put a fine point on it, a spirit is simply an immaterial being endowed with the two interior faculties of self-transcendence: intelligence and volition. Since we also possess these faculties, we too are spiritual, although amazingly incarnate in matter.

In the Abrahamic traditions, personhood exists in three irreducible forms: divine, angelic and human. Furthermore, personal reality is, again according to Thomas Aquinas, “the most perfect of all that exists in nature” (perfectissimum in tota natura). We instinctively know this, for when we insist today on the “dignity of the human person,” we are simply acknowledging this perfection in the only persons we have direct, palpable contact with: ourselves. But it applies at least equally to the angels, and of course immeasurably more to God.

In saner times the existence of personal, spiritual beings would have been among the common-sense coordinates of all intelligent earthlings. The doubters would have been the oddballs. In fact, in those days, after a long conversation with Mr. Fry, someone may well have walked away and commented on how polite and witty the comedian was, but then lowered their voice and whispered, as if revealing a dark secret: “…but the poor man does not even believe in angels!”

SAMPLE READINGS FROM THE BOOK

Prologue:  So much we don’t see