The Day I Was Interviewed by Msgr. Marcel Lefebvre 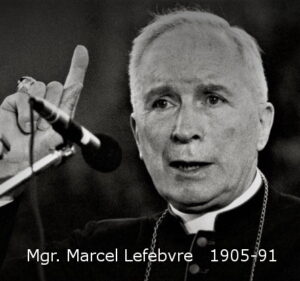 It was in the month of April of 1975. At the age of 22 I had traveled to Switzerland, accompanied by my beloved mentor at the time, John Senior. We were going to visit the (in)famous seminary of Écône. This was the seat of the controversial (but at the time canonically legitimate) Society of Priests of Saint Pius X. Although Senior had high praises for the version of “pre-conciliar” Catholicism cultivated there, he had not himself been able to visit it – until now. Here, he said, we might find the ideal of the priesthood presented to his Catholic students, many of them (including me) converted through his influence. According to Senior, this would probably be the only viable model for the survival of the Church in coming times, at least in what regards the formation of diocesan clergy.

I am still profoundly grateful to Senior for introducing me to Catholicism in the first place (I was raised Presbyterian), but I must say that I have even greater gratitude for another of his interventions in my young life. Despite his advocacy for “old-time religion,” it was, ironically, John Senior who rescued me from succumbing to this “traditionalist” Catholicism – so deeply attractive at first glance, and so highly problematic in the long run.

Here I am in 1975. What a buzz to still be young and think that you know just about everything. At least, that’s the way I felt back then. My initial enthusiasm for the Catholic Church was for something I understood to be – in the words of one of my first  catechisms – “a complete answer to life.” With some qualifications, I can still assent to the basic idea. At any rate, back then I resolved to follow the example of some of Senior’s students who had discovered a French Benedictine monastery near the village of Fontgombault. Here they still cultivated Gregorian Chant and had resisted recent liturgical reforms. And so it came to be, at the end of 1974, that I too left for France. My plans were to live a cloistered period at that institution in order to see if, perchance, I might have a monastic vocation myself. I ended up staying for a few months, but, predictably, discovered that I was not cut out for the “Benedictine option.” The strongly bucolic vision of the Faith favored at the time by John Senior tended rather to nourish contemplative vocations, rather than more academic ones, like mine.

The Dominicans of the 70s Senior found to be confused and – for a youngster like myself – probably confusing, nor did he always have a good word to say about the Jesuits. So I found myself somewhat adrift. Thus, I wanted to take a good look at Écône and visited it twice, the first time being in February of 1975. I went in the company of a marvelous Belgian family that had kindly taken me in during my stay in Brussels. They were fervent traditionalists themselves, something that held them together for some years, but was later, as so often occurs, to tear them apart.

The second visit was in April of the same year, but this time with Professor Senior in tow. We stayed at the seminary for three days and then went on to Fontgombault, where I was to begin my long retreat (Senior shortly thereafter returned to the States). The orderliness and immaculate cleanliness of the house at Écône, its impressive liturgy (scrupulously celebrated according to the 1962 missal), a quasi-military sense of order, with undulating cassocks wherever you looked, and, of course, delicious Franco-Swiss cuisine, left an indelible impression on my young imagination. However, I was actually far more galvanized by other matters. Two things occurred during our stay, and a third followed shortly after our departure. Here they are in sequence:

1) There was a British deacon studying at the seminary, and he was asked to take me under his wing during our stay. I wanted to practice my French, but he insisted on using our mother tongue; since he spoke with a charming English accent, I didn’t protest. Sunday came and he invited me to join him on an afternoon stroll; soon, you would have seen the two of us climbing along a small, sinuous path up the adjoining mountain. During the three or four hours of our trek, I was mostly silent, but had little choice anyway, since my host never stopped talking. 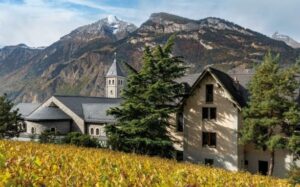 This deacon was tall, thin, of an ascetic appearance, clearly quite intelligent and very eloquent to boot. In a captivating exposition he explained to me the importance of a large number of Marian apparitions around the globe, of the imminent apocalyptic events they foreshadowed, and then – as a kind of corollary to this update on sacred history – urged me to join the seminary as soon as possible. To him, this was the only one on earth in a position to save the Church. All this was punctuated with frequent quotes from Thomas Aquinas (with questions, articles and subdivisions of the Summa all duly noted). I was quite stunned at his almost theatrical performance. He also gave me a list of books that I simply had to read in order to understand the situation we were in. I later purchased the books, and have them still today (although locked away in a closet).

Fun fact: This deacon, some twelve years later, following his priestly ordination, was to be one of the four bishops consecrated, illegally, by Msgr. Lefebvre. It was this that occasioned the schism of the SSPX with the Church in the late 80s. And as if this were not enough, our new English bishop would decide to enter into a further schism, this time with the SSPX itself. Today he travels the world as a solitary courier of what some see as the final truth, visiting small groups of anxious traditionalists, deeply convinced of his apocalyptical role. 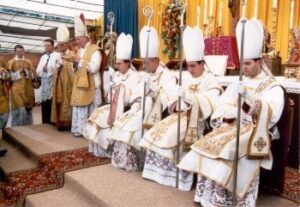 2) The second event was my interview with Msgr. Lefebvre himself. He became aware of my presence and interest in his seminary, and so freed up an hour in his agenda to receive this young American. This time I would indeed be able to use my French, for the bishop did not speak English. We chatted for nearly an hour, as I told him my story and answered his questions. After the interview, he turned me over to the American priest in charge of the anglophone candidates. Together we agreed that I would return to Écône after the months I had already scheduled at the monastery in France. The door was open should I decide to enter the seminary.

I found Msgr. Lefebvre cordial, though less fiery than the English deacon. But I liked them both. At the end, I was very happy that I had been so well received and indeed invited to come back and quite possibly begin formation. Senior had spent most of our visit speaking with the seminarians, trying out his own French, and even giving a lecture on literature (in English) to the seminarians. For my part, I was extremely eager to speak with him about the seminary and my plans. But that would have to wait until we had departed, and were left to ourselves on the next leg of our trip, to France. 3) When we were finally deposited at the train station in Sion (the neighboring Swiss city), the professor and I found our seats in one of the cabins and began to speak about our experience. I could hardly contain myself. I exclaimed that, finally, we had located the Catholic paradise for priestly formation that we had almost despaired of ever finding. I told Senior, excitedly, of my interview with the bishop and the invitation I had received. However, I at once noted an ambiguity on his face that I had not expected. Not wishing to entirely extinguish my youthful enthusiasm, he just slowly shook his head and said: “I don’t know…”

Although the schism of this community with the Church would only occur years later, Senior already sensed a tendency that worried him, and he tried to explain this to me as gently as possible. Still, nothing prepared me for the words he would then utter regarding the good Bishop Lefebvre. I was sincerely stumped as I heard him say: “What he is doing here is Protestant.”

Now I am far from demonizing all things Protestant, but to say this about an enterprise that prides itself on being 200% Catholic left me speechless. Only later would I understand what he meant, and that he was right. Soon thereafter came the verdict I knew was coming, but still feared: namely, my respected professor counselled me not to return to Écône. Although deeply disappointed and rather bewildered, I complied, and in fact never again set foot in the dissident seminary. As far as I can remember, we spoke very little for the remaining five hours of the trip.

There is a paradox in all this. From that point on, I followed other roads to the priesthood and continued to distance myself progressively from traditionalist ideology. I also became a fan of Pope St. John Paul II (not without misgivings here or there) – he was, after all, the pope that would ordain me in 1983. Senior, however, did not conceal his aversion to the pontiff. With the passing of the years, and to my great chagrin, he withdrew more and more into the worldview of the very traditionalism from which he had rescued me in 1975. Nonetheless, my affection for him continued and we maintained regular contact until his death in 1999 (and an intense correspondence, though more about philosophical and theological than ecclesiastical issues).

Over the years, he shared two other matters with me which seem relevant to what I’ve written here. They in some way contextualize this counter-intuitive denouement of his Catholic life. After giving a conference to a group of the faithful, I once heard him exclaim (privately): “May God deliver me from Catholic conservatives!” A certain pharisaism, not infrequently on display among ultra-conservatives and traditionalists (and quite alien to Senior’s soul), seemed to weigh heavily upon him. On another occasion he tried to explain to me why he had decided to frequent chapels of the schismatic SSPX, and clearly knew this needed explanation. He tried to justify himself saying that he was old and sick (heart troubles in the 80s and cancer in the 90s) and thought this somehow dispensed him from the Church’s prohibition of attending schismatic liturgies when approved liturgies were available. He claimed the “new” masses upset him so much that his health was in jeopardy when he participated. I understood, even if I could not condone.

As I gave him my priestly blessing for the last time shortly before his death, I interiorly thanked God for the privilege of being first a student, and then a friend of this master. Despite the barrier that had risen between us over his opinions regarding Vatican II, the post-conciliar popes and the revised Missal, I thanked Divine Providence that this remarkable man had been called, at the opportune moment, to impart a counsel that was to put me on the right track in my vocation for now nearly 50 years. 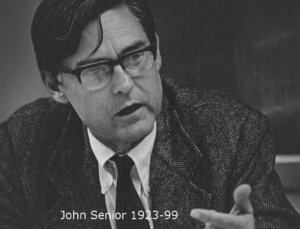