Rescuing the Obvious – On Truths that Should Be Truisms

Nothing unites people more than sharing what they hold to be obvious, even if only tacitly and implicitly. Disputed questions, controversies and unresolved problems inevitably divide us, but the sure things – those that “go without saying” – are what make us feel that we have but one heart, instead of several – one mind, instead of many.

Study closely any seemingly intractable altercation and you will find that what separates the opponents is far more what each presupposes (and thus does not state) than the patent content of their words. To put it another way: they are at odds because they are focused on what each is saying, and paying little attention to what they are talking about. Grammatically speaking, they are stuck on their predicates and oblivious to the referents of their subjects.

Healthy rivalry in sports, as in other pursuits of arduous goals, only falls short of animosity because of presupposed agreement on fundamentals (the rules of the game). And such fundamentals transcend competition. However, when the agreement is disputed, or forgotten, rivals quickly become enemies, contests turn into wars and honorable competition in business or art turns predatory. The handshake before and after the engagement begins to feel phony; soon it will be omitted as meaningless.

Today’s cultural and political disunity is not due, in the first instance, to controversies and problems, but rather to the progressive erosion of all that was once held to be obvious. Even when we keep silence, we find ourselves staring at each other like lonesome strangers. Previous looks of assurance, arising from our fund of shared convictions, have been replaced by the permanent gaze of inquiry, doubt and suspicion. And the disquiet comes not from incertitude about whether you believe this or believe that, but rather from skepticism as to the believability of anything at all.

We may have once doubted whether someone was gay or straight, but we still were confident that the former preferred the same sex, and the latter, the opposite. But now we don’t just wonder which sex is desired by whom, but rather whether there are any sexes to be desired to begin with. Non-binary blurs are not just winning out against defining the sexes, but threatening the very existence of definition itself.

And it gets worse. Even in the midst of our most impassioned pleas for the defense of human rights, we already sense the rumbling of an inchoate conceptual earthquake just beneath our entreaties. “Does human nature even exist?” “Do we even know what a human being is?”

The highest service of philosophy in times such as these is not to emulate the sciences by trying to discover some new thing, or the arts by providing one more imaginative framework within which to live our lives, or even religion by supplying salvation or liberation of what is deepest within our mysterious humanity. It is rather to come valiantly to the rescue of a number of basic truths that, in saner times, have always been truisms. The increasing denial of their claims today is not just cognitive error; it is philosophical treason. But in today’s disjointed world, there is a topsy-turvy twist to all this, for, unlike the revolutions of the past, in this case it will be the traitors who chop of the heads of the truists. 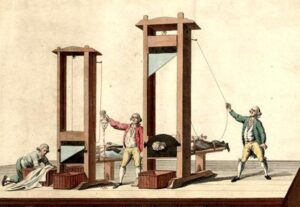