The Past – behind us temporally, around us spatially 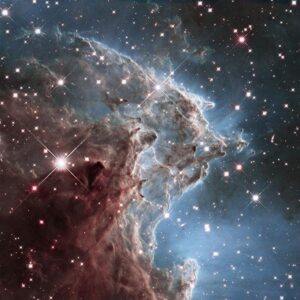 In a world that glorifies the future, treasures progress and tends to look down its nose at the past, we are presented with a literally astronomical paradox. Since the Age of Discovery and its disclosure of ancient cultures, along with the revelations of archaeology and paleontology in the last 200 years, knowledge of our chronological past has grown exponentially. Now we know know ourselves to be bearers – both geologically on the Earth and genetically in our bodies – of millions of years of development that powerfully impact our lives and our view of the world. The so glorified ‘future’ is, in compararison, just a grain of sand.

However, for some time now, the past has obtained a paramountcy of even greater sovereignty due to recent discoveries in astronomy. Since the detection, one hundred years ago, of the multiplicity of galaxies in our cosmos – until the 1920s we thought our Milky Way was equivalent to the universe – the spatial extent of reality has expanded beyond all bounds, and the celestial bodies and galaxies are now numbered in the trillions and quadrillions. But while we ponder these numbers with wonder, a simple truth about the new data is merely whispered, instead of being – as it deserves to be – shouted from the rooftops.

As we look at the celestial vault – whether with the naked eye, with a traditional optical telescope, or with the penetrating infrared lenses of the James Webb – we are in truth only viewing celestial reality’s history and peering into the cosmic past. We do not see the universe as it was ‘once’, nor even as it is ‘now’, nor can we. Our vision is severely limited to how the creation looks to us, and indeed for us. And, adding insult to injury, when we fiddle with our chronometers and try to get some coherent purchase on this phantasm from the past, we do not see a past, but only multiple pasts, and indeed, millions and billions of pasts, all in chronological disjunction. The light coming from each star and each galaxy is arriving in accordance with its own cosmic calendar, unsynchronized with all the other celestial sparkles.

None of these points of light, however, has a real story to tell, but only quantities to be measured, and distances and forces to be calculated. Understandable meaning is not present, only scales to be applied and measurements to be made. These phenomena are nonetheless telling us something rather surprising, and unexepected by the attentive scientists, namely, that our traditional earthly perspective – the way we view the starry sky every night – has gained new confirmation of its importance, centrality and meaning. Our nocturnal look at the stars still turns out to be the best and most revealing look of all. It tells us just what we need to know about the stars. The mystery of the universe – that which is its most manifest attribute – continues to show off its glories every night, with or without a telescope. Caeli enarrant gloriam Dei. (Ps. 18)

The philosophical and theological consequences of all this are as overwhelming as is the star-studded spectacle itself. 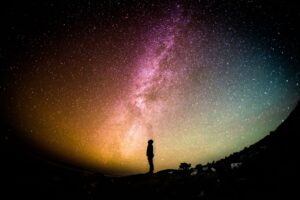 Things We Cannot Learn from the James Webb Telescope